Hawke’s Bay Airport is flying high after receiving the Airport of the Year award at the recent 2022 NZ Airport Awards. The airport dominated the medium-sized airport category, taking home three awards, including Sustainability Initiative and Community Initiative of the Year.
Hawke’s Bay Airport CEO Rob Stratford is thrilled and says it’s a tribute to the hard work and dedication of the airport team.
“To come away with three awards was an incredible honour. It shows that we’re at the leading edge of our industry and it’s a real reflection of the expertise and the genuine passion our people bring to their work.”
The airport won Community Initiative of the Year for its work throughout Biodiversity Week 2022, raising awareness of the need to protect our biodiversity.
Hawke’s Bay Airport partnered with Biodiversity Hawke’s Bay to bring a series of six projects to life over the course of the week, including the creation of an interactive native garden inside the airport terminal. More than 150 plants of all shapes and sizes were on display, interspersed with engaging educational information.
“As a proud sponsor of Biodiversity Hawke’s Bay, this was a cause close to our hearts, so we took the opportunity to support the vital work they do by using the airport as a platform for biodiversity education,” Mr. Stratford says.
“Walking through the terminal doors into a native garden was quite unexpected for passengers and brought smiles to a lot of faces. We were really pleased to see people actively engaging with it and taking the time to learn about the critical importance of biodiversity.” 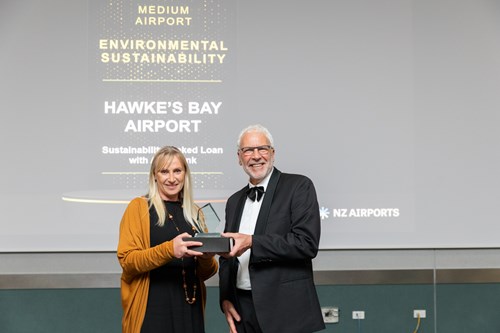 Hawke’s Bay Airport’s commitment to the environment was on full display throughout the awards night, with the organisation also taking home the Sustainability Initiative award for its ground-breaking partnership with ASB.
In November 2021, Hawke’s Bay Airport became the first airport in the country to secure a sustainability-linked loan. The loan requires the airport to commit to key environmental, social and governance targets, with lender ASB adjusting borrowing costs based on performance against those targets. The practice is part of the financial sector’s innovative partnership approach to growing a greener economy and combatting climate change.
The New Zealand Airports Association, which judges the awards, said: “Early leadership and a deep commitment to sustainability were demonstrated in this Hawke’s Bay Airport initiative. It has taken on a loan which specifically comes with ambitious, measurable sustainability goals, and strict criteria and independent assessment of meeting those targets. The breadth and depth of the airport’s
decarbonisation and sustainability plans is applauded, and the initiative is considered an exemplar for the sector.”
Airport of the Year recipients were chosen from the pool of award winners, with an award given in small, medium and large airport sub-categories. Hawke’s Bay Airport took home the Airport of the Year title in the medium airport sub-category, with the judges citing its leadership, strategic focus and commitment across key issues that will affect the future of airports, particularly in regard to community engagement and sustainability.
Mr Stratford says the win is a great feat for the airport team.
“To come away with an Airport of the Year award is an extraordinary achievement. It’s absolutely a testament to our people, the exceptional work they do, and the strength of the strategy we have in place. I’m very proud of everyone involved.”